"Senator Mitchell has been a committed advocate for all Angelenos, passing over 90 bills to address housing discrimination, economic inequality, education and more," said former San Francisco District Attorney and Assistant Chief of the LAPD, George Gascón. "You would be hard-pressed to find a representative in LA who has worked harder or gone further than Senator Mitchell on moving the needle on reform at every level, and fighting for the most vulnerable in our communities. I am proud to endorse Senator Holly Mitchell in her race for LA County Board of Supervisors in the 2nd District."

The Board of Supervisors is at the helm of putting forth policy and budget solutions to address our most pressing social and economic issues ranging from homelessness, housing, criminal justice reform, and environmental justice. Most recently,  the Board of Supervisors passed an unprecedented Antiracist Los Angeles County Policy Agenda that Sen. Mitchell is in support of.

"It is imperative that the next County Supervisor for the Second District - which includes the most diverse communities of color - is fully committed to building on the momentum for racial and social justice" shared Senator Holly Mitchell. "Since the year 2000, over 880 residents have been killed by law enforcement in Los Angeles County. I am committed to ensuring the Board of Supervisors is working  with the District Attorney in providing transparency and accountability to our communities. I am honored to have the support of Gascon, who shares this commitment."

Gascón has been a longtime supporter of Sen. Mitchell's leadership in creating criminal justice and police accountability reforms. In 2017, he was the only District Attorney that supported Assembly Bill 392 authored by Assemblymember Shirley Webber and co-authored by Sen. Holly Mitchell to create statewide measures to prevent overuse of police force.

Gascón's support of Sen. Mitchell joins a coalition of community leaders and advocates including artist and organizer, Patrisse Cullors. On Thursday August 6 at 3:00 pm pst, Mitchell will host a virtual discussion on creating a more equitable and just Los Angeles County with Gascón and Cullors. This event will be livestreamed on the Holly J. Mitchell for County Supervisor Facebook page. 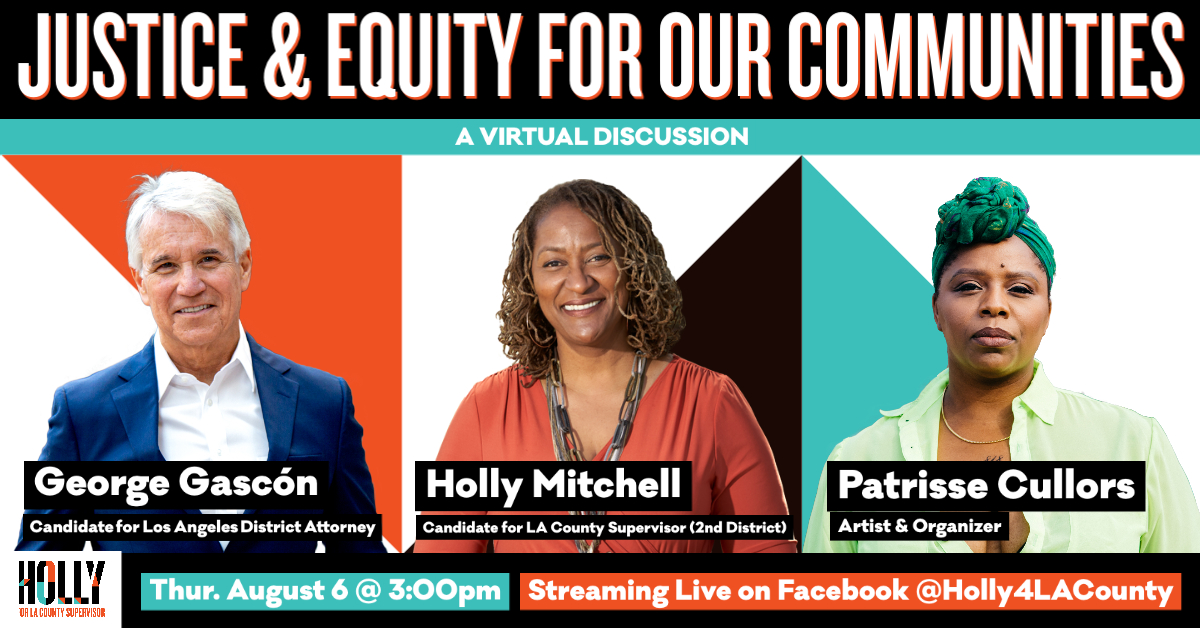 Senator Holly Mitchell is on the November ballot for the open seat to serve as County Supervisor for the Second District. Mitchell has the endorsement of Governor Gavin Newsom, Culver Cityo Councilwoman Meghan Sahli-Wells, Los Angeles City Councilman David Ryu, former opponent and entrepreneur Jorge Nuño, The LA Times, SEIU 2015, the National Union of Healthcare Workers, the Black Women's Democratic Club and many more. For a full list of endorsers click here.

@HollyJMitchell
Early in-person voting begins TODAY in LA County. Remember to wear a mask and maintain social distancing. Go to http://LAVote.net to find a voting center near you. #Vote 🗳

@HollyJMitchell
"Mitchell will bring to the Board her progressive vision, her tireless work for those most neglected by justice, and her political independence." Gracias por el apoyo @LaOpinionLA

@HollyJMitchell
Two signs I love to see! Thank you everyone for your support throughout this campaign. We have less than two weeks before voting ends. Learn how you can get involved at https://hollyjmitchell.com/get_involved